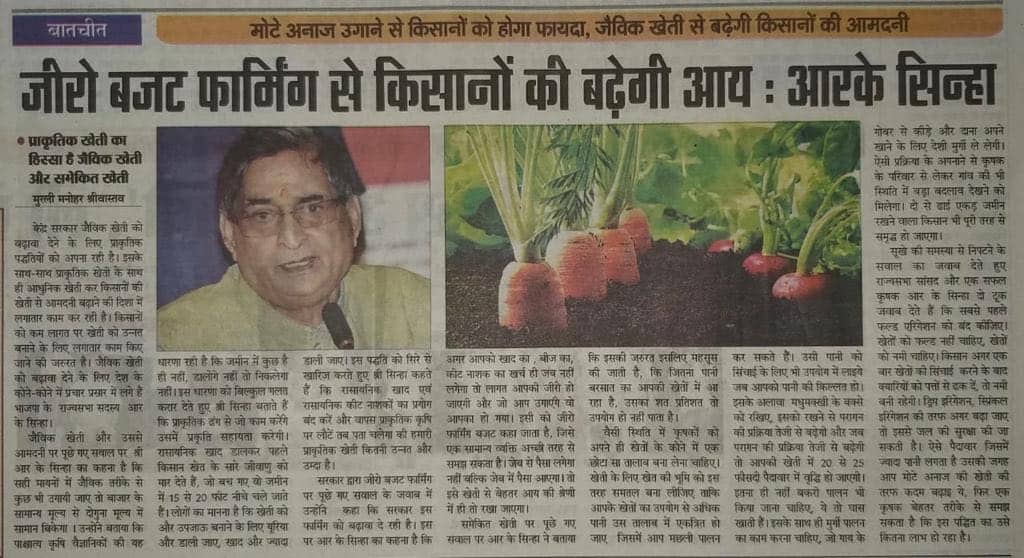 Responding to the questions on the organic farming and its income generation, Shri R. K. Sinha stated that, using natural methods organic farming can double the farmers’ yields.Disagreeing with the western agricultural scientists’ assumption that, the land has nothing and hence, if nothing is injected in the land nothing will grow, he stated that, nature helps those who work in natural ways. By use of chemical fertilizer insects are killed and those which survive go 15-20 feet deep. Common belief is that, to increase the crops’ productions, more Urea and fertilizer should be used. Refuting from the source, Shri Sinha stated that, the use of chemical fertilizer and chemicals to kill the insects should be stopped and only upon returning back to the natural ways of farming shall we realize its benefits.

Government is boosting the zero-budget farming. Shri Sinha explained that, when a farmer does not have to pay for compost, seeds, etc. he does not invest anything from his pocket, and, that is zero-budget farming. Thus, instead of expenses, farmers will gain income.Therefore, organic farming is considered to yield better income.

Speaking about composite farming Shr. R. K. Sinha mentioned that, it is necessary because the amount of rain water that is being utilized in farming is not as much as the rainfall. Therefore, famers should create small ponds in one corner of their farm to accumulate the excess amount of rain water in which farmers can start fisheries. The same water can be used for farming when there is shortage of water. In addition, farmers can keep boxes for bees, due to which the pollination will increase which will yield 20-25% more crops. Farmers should also have goats, as they eat the grass. Along with these, poultry farming should be started because the local cock/hen would eat the seeds and insects from the cow dung. All these will change the conditions of the villages. A farmer with a 2-2.5 acres farm shall also become wealthy.

In response to the question on draught situation, Shri R. K. Sinha stated that, the flood irrigation should be stopped. Farms do not need flood but need steady flow of water. After planting, if the farmers would cover the channels with leaves, then the water flow will become steady. Water can be protected through drip irrigation and sprinkler systems. Instead of farming the crops which require more water, steps to farm coarse grains requiring less water, should be taken.